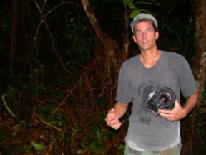 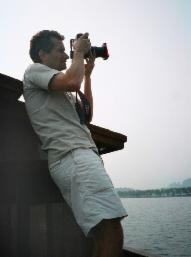 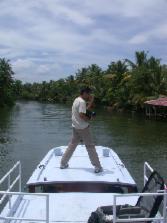 After over 20 years in the communications industry, I decided to take a different path, and turn an enjoyable hobby into an enjoyable profession. A lifelong love of nature and a developing interest in photography as a teenager ultimately led me into the photography program at The Southeast Center For Photographic Studies located on the campus of Daytona Beach Community College in 2003. I have also attended Crealde School of Art in Winter Park since 2002 and was awarded a Fellowship in their photography department. My areas of focus are travel, nature, and wildlife, however I am practiced in portraiture, studio, and commercial photography. Some of my many influences are Ansel Adams, Eliot Porter, Galen Rowell, my professors, and fellow students.

I try to capture or build an image in a unique way, or render a familiar image in the manner we are used to seeing it but improving upon what has come before. I want to elicit emotion from the viewer, and hopefully even take them to the familiar or unvisited place I present.

The work on my website is a small example of images in the collection. Please feel free to contact me if you are looking for something specific.

I currently offer two ways to obtain work. The first is to contact me by phone at 407-437-6167 or via e-mail and place a direct order to purchase the prints.  To get an idea of the prices, click on the following link:

The second way is to lease pieces. This method comes in various options and is very desirable for businesses. You can lease for a determined period of time for a number of pieces. You can choose to have the work rotated yearly, bi-yearly, or quarterly.

Other ways of obtaining the work is at various public shows as they occur. These opportunities will always be posted as they are scheduled on this web page under Exhibits & Events below.

All work will be signed by the artist and include background on the image. If shipped without framing, images will be rolled and placed inside a tube mailer for protection. If framing is requested, utmost care and packaging will be provided.  Additionally, the work will be shipped insured for breakage to be paid for by the client.  The price lists above do not include the cost of shipping & handling or insurance.

Exhibits & Events - Past, Current, and Future

-  Visit to Geneva and Zurich, Switzerland.

-  Visit to Helsinki, Estonia, and Latvia.

-  Trip to champagne area of France

-  Two and a half month visit to USA.

- One week visit to Munich, Germany.

- One week visit to Barcelona, Spain.

- Trip to United States and one week visit to Ireland.

-  Late May visit to Paris for French Open Tennis Tournament.

- Two day visit to Munich during Oktoberfest and two and a half week tour of southern Italy.

January/February 2008  Solo Show - "30 Days In China"
Opening Reception - January 11th 7pm  The venue again will be the main downtown branch of the library.  In addition to exhibited photography work, there will be work created by a Chinese artist brought back to the US, catered Chinese food, Chinese cultural music, and a slide show on the 30 day China experience of the artist and his wife.

- Relocation To Amsterdam - We have relocated to Amsterdam, Netherlands for a projected three year stay.

- Planned three week tour of New England and southeastern Canada for a fall colors photography tour.  Any suggestions feel free to  email me what you know and what you think!

- Fourth Semester Student Show - The Southeast Center For Photographic Studies on the campus of Daytona Beach Community College.  Along with fellow students, I will display work in the program gallery in the liberal arts building.  Go to http://www.dbcc.edu/ for directions.

July & August, 2006 - Solo Show - Windows To The World                      The main downtown branch exhibited approximately 30 pieces of work centering on my travel images. Price list from the exhibit is posted above under Purchasing Photographs.

April 2006  - Crealde School of Art, Fifth Annual Spring Art Sale   Established and emerging Central Florida artists will exhibit their art on campus, 9am to 5pm Saturday and 11am to 4pm Sunday. Part of the proceeds benefit Crealde programs.

Image Recording- I use Velvia, Astia, and Provia Fujifilms and Kodak Portra 160NC for my color images and Ilford Films and Kodak PX Plus-X for black and white photography. Occasionally I experiment with other films. For my Canon 5D Mark III, I use Sandisk and Lexar flash cards.

Image Capture - For film, I use a Mamiya RB67 Medium Format camera with four Mamiya lenses (50mm, 90mm, 180mm, and 300mm).  Digitally, a Canon 5D Mark III with a Canon 70-200mm f2.8 lens with a Canon 2X teleconverter on the long side, and a Tamron 28-75mm lens for wider needs.  Both camera's are fitted with battery grips and eyepiece extenders.  Occasionally I'll use a Wista 4X5 view camera, or Horseman 8X10 large format.

Image Printing - I print on Ilford papers for my black and white photography and various Kodak papers for my color work in the wet darkroom. I use an Omega Super Chrome D Dichronic II enlarger to expose the image to the paper and then use Kodak and Illford chemistry to make the black and white print. For color printing I use the Delight DL-M50RT RA-4 processor to print color images. When printing digitally I use various Epson and Ilford papers on various Epson printers.  I have started using several labs for digital work, as well.

Image Rendering- The traditional methods are used in the wet darkroom and Photoshop CS3 is used in the digital darkroom.

Image Scanning- For scanning negatives I use the Nikon Coolscan V ED and Super Coolscan 9000 ED and for print scanning I use the Epson Perfection 4490 flatbed scanner.